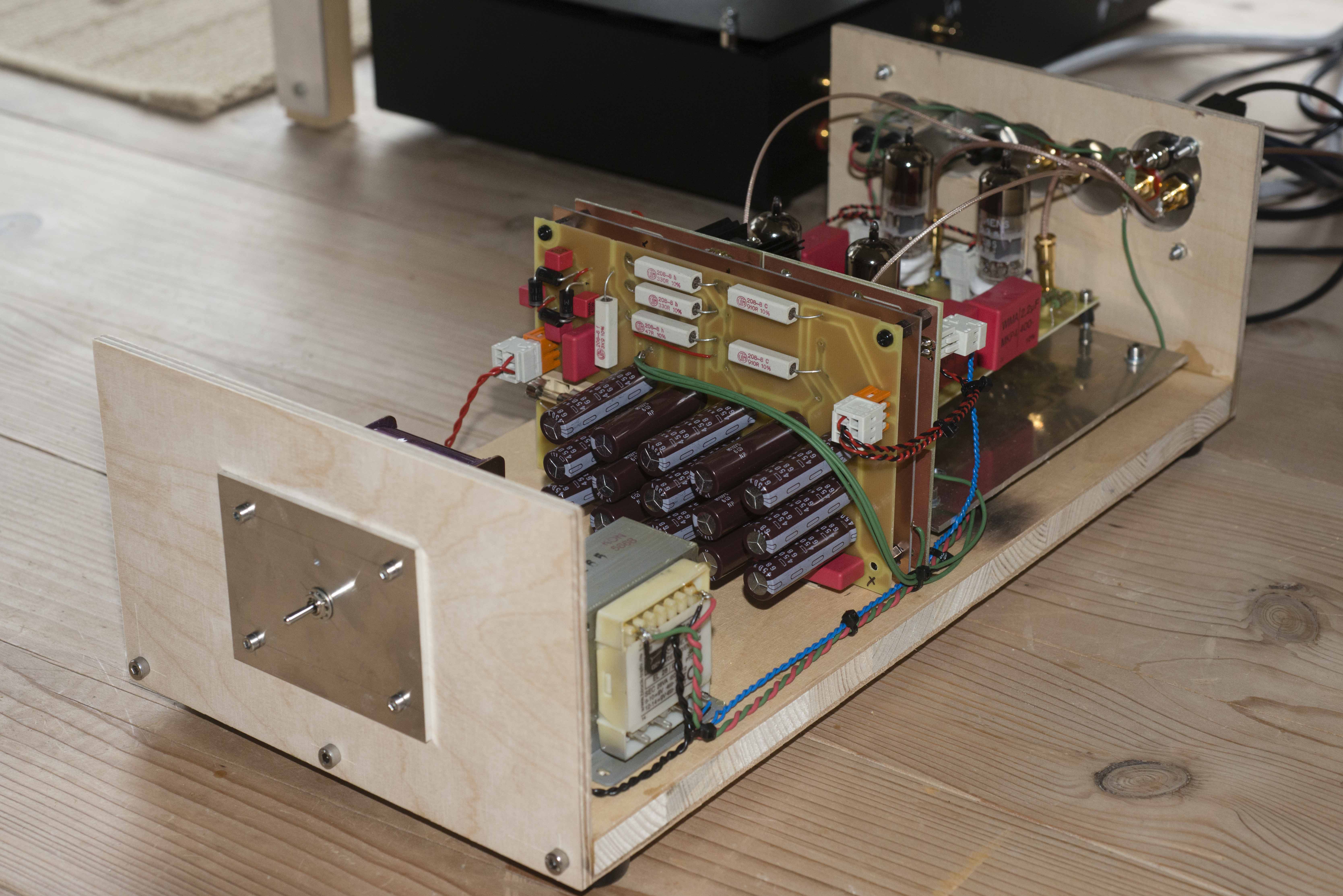 The MTA run phantastic. The demand is increasing and the chain is demanding something new, especially when the source strength no longer fits. The answer: a new RIAA tube .

Until switching to MTA Preline and MTA amp an excellent RIAA (passive network) run, but due to their low gain requires a winding of the Preline almost to the stop.

Based on the well-known E88CC she played musically exemplary and pretends a high level.
A good friend had designed it for me, and so far I’ve been really happy with it.

But the lack of amplification plus noise drove me to make a search ……….

What was in the specifications:

– procurable tubes without exorbitant price level
– Gain equivalent to the signal strength of CD player, DAC or tape machine
– MM, because I only use MM system and MI systems at the tube chain
– Low noise
– Free from humming
– Musicality

At some point I came across the web pages of Alex Kriegel , who had contacted me because of the MTA concept – as a kind of comrade.

As the owner of a true tube mountain, he likes to design, measure and test sophisticated circuits with exotics.

And then a RIAA guy shows up, which immediately made me curious.

Also at various other points of the inet appeared at once circuits that differed only in details.

Somewhere, however, I suspected a hook , and indeed came in the form of a contribution to the targeted tube types.
The tube is considered a mimosa, was originally developed and manufactured for the post office.
Stable stationary conditions, no vibrations, specified conditions …… ..

Friends raised a warning finger, especially as no one had run clean couples, let alone a quartet, which I needed now.

But once curious, I rolled over the costs and decided, despite all warnings, to get started.
A quartet of tubes I found in the bay in a timely manner – and as always a nice contact among tube farmers …… ..

First came the Grabbelkiste turn:
Trafo for the anode voltage was there, as well as a 9V transformer for the DC heating. 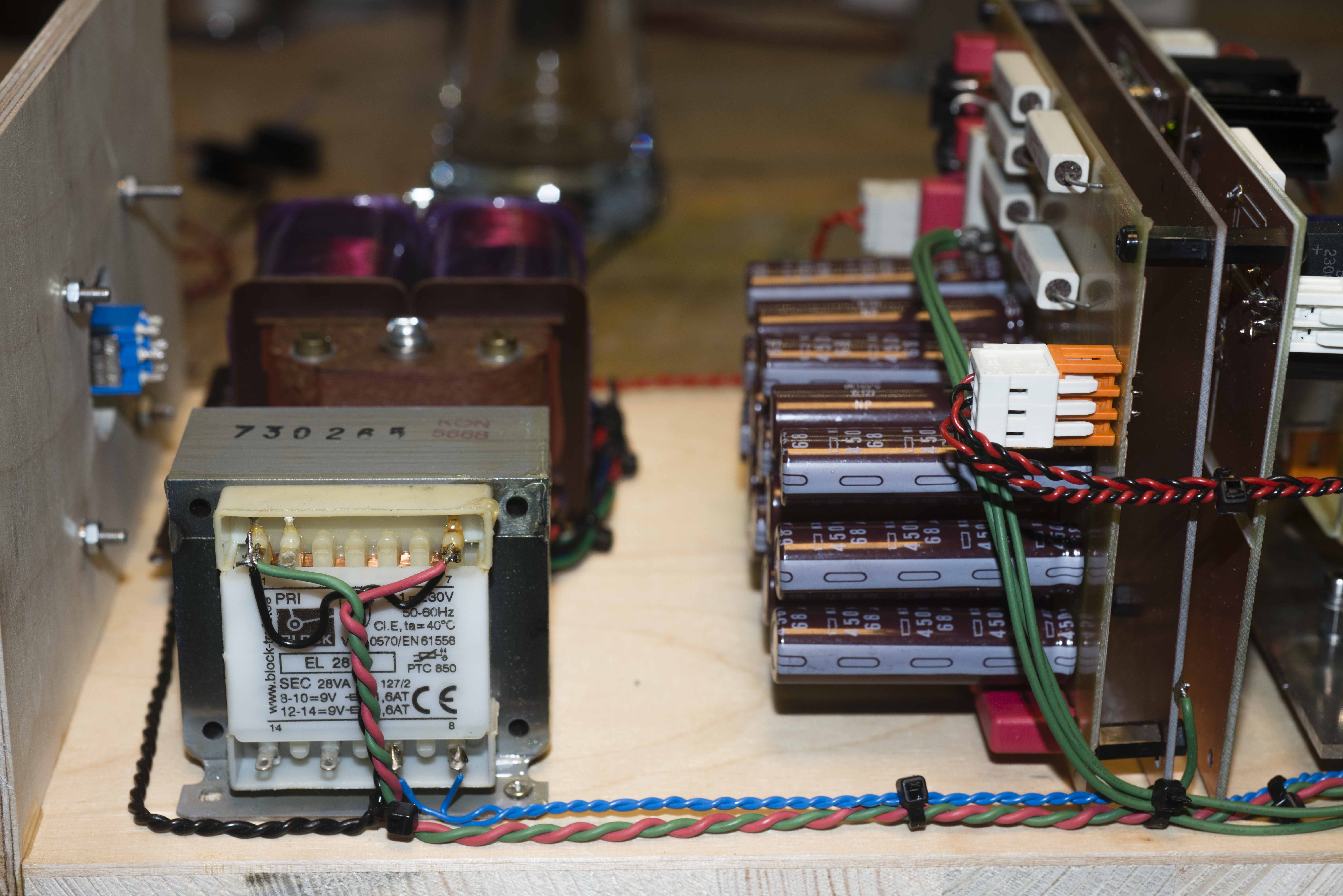 I could take over the power supply from the MTA Preline almost unchanged, the anode voltage was only 15V lower, which could easily be calculated and built by the series resistors with increase of the damping. ( www.audionist.de )

New was a DC heater with a soft start circuit (about 40 seconds warm-up time) and very finely adjustable heating voltage.
But if sensitive tube, then that should be in it.
Importantly, it was found that 9V AC should be present for the circuit to run, but no higher voltages, as the heat loss drives the LM 317 into thermal shutdown despite the heat sink.
Approximately 1.3 A had to be mastered.
Otherwise, the soft start is described as a circuit in the LM317 documents clean. 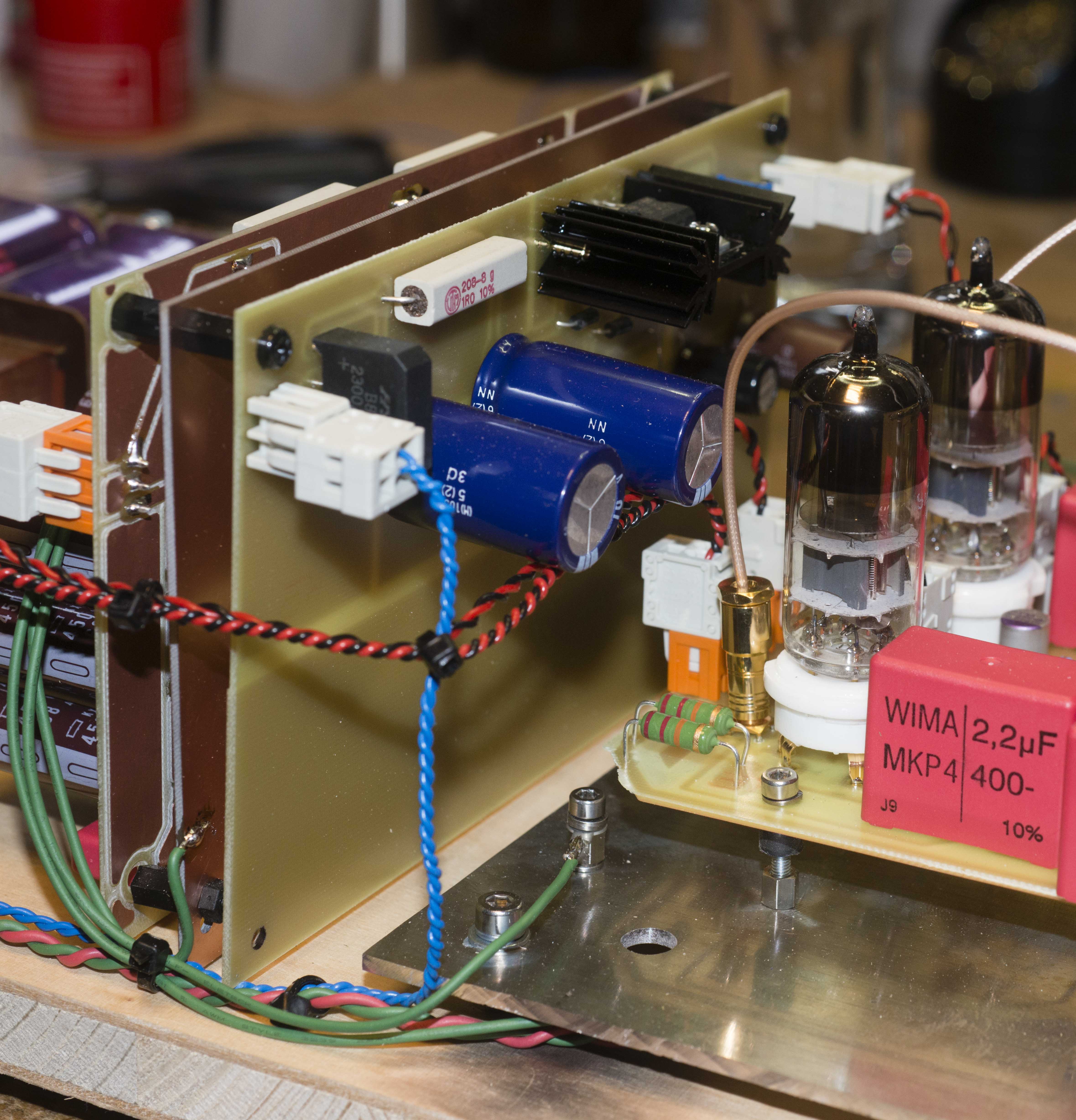 The RIAA board with the 4 narrals was designed quickly.
Because of the high gain I paid attention to short distances , the gridstopper were soldered directly to the socket, centrally pulls a thick grounding strap “through” the board.

I went new ways in the construction:
the transformers are located directly behind the front panel, they are switched via a relay circuit – as with all other devices – potential-free . 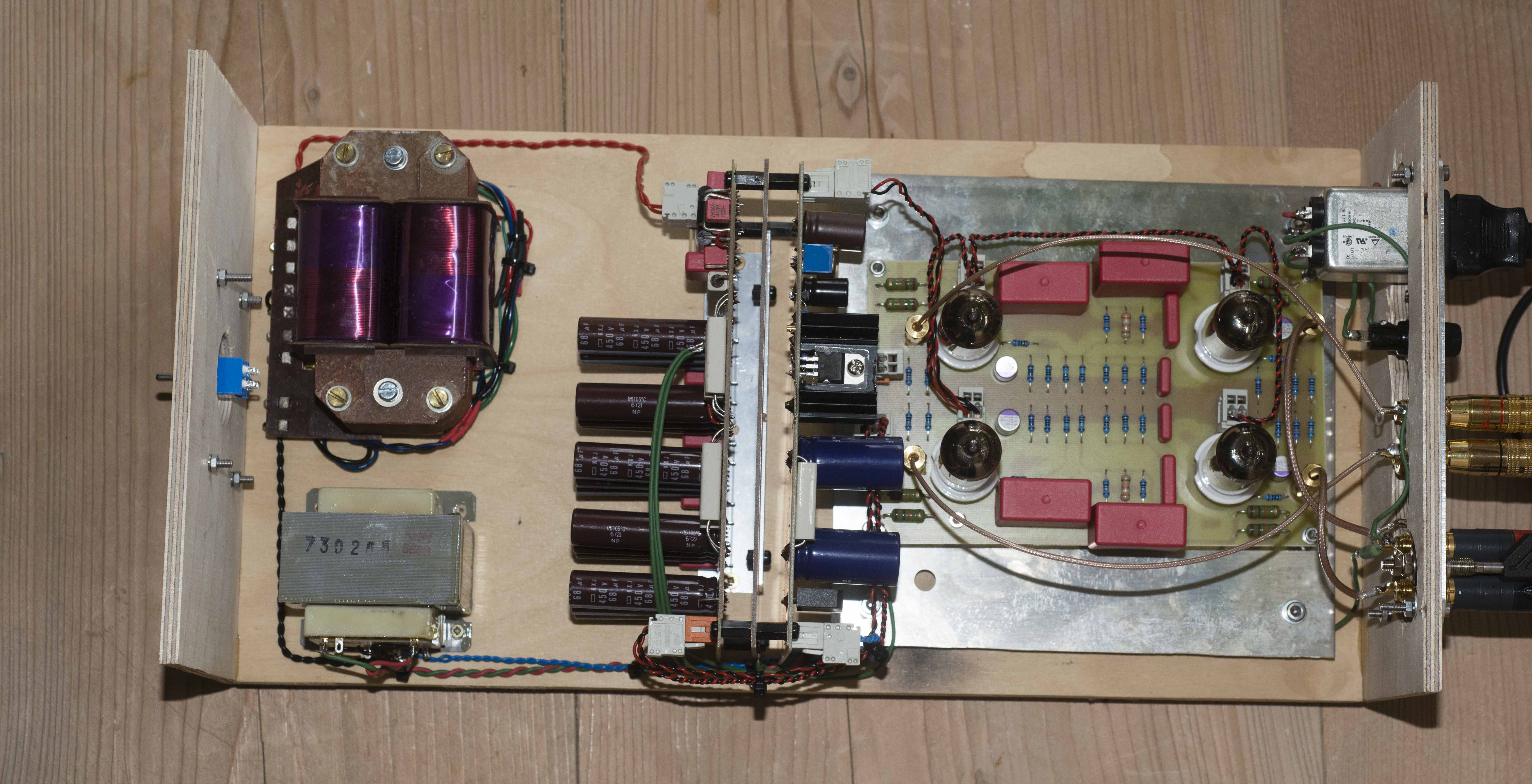 Then I installed a double-sided copper-clad Paltine vertically and transversely to the transformers, which carries on the transformer-facing side the anode voltage power supply and on the back the heating supply with starting circuit.
This mechanical construction has shielding effect, as well as the structure of the RIAA board on an aluminum plate.

The actual RIAA board is installed horizontally, with the input sockets (SMB) facing the back. This results in very short signal paths.
The board is mounted on M3 rubber dampers to allow the board to swing freely (mechanical protection of the tubes and microphonic prophylaxis) 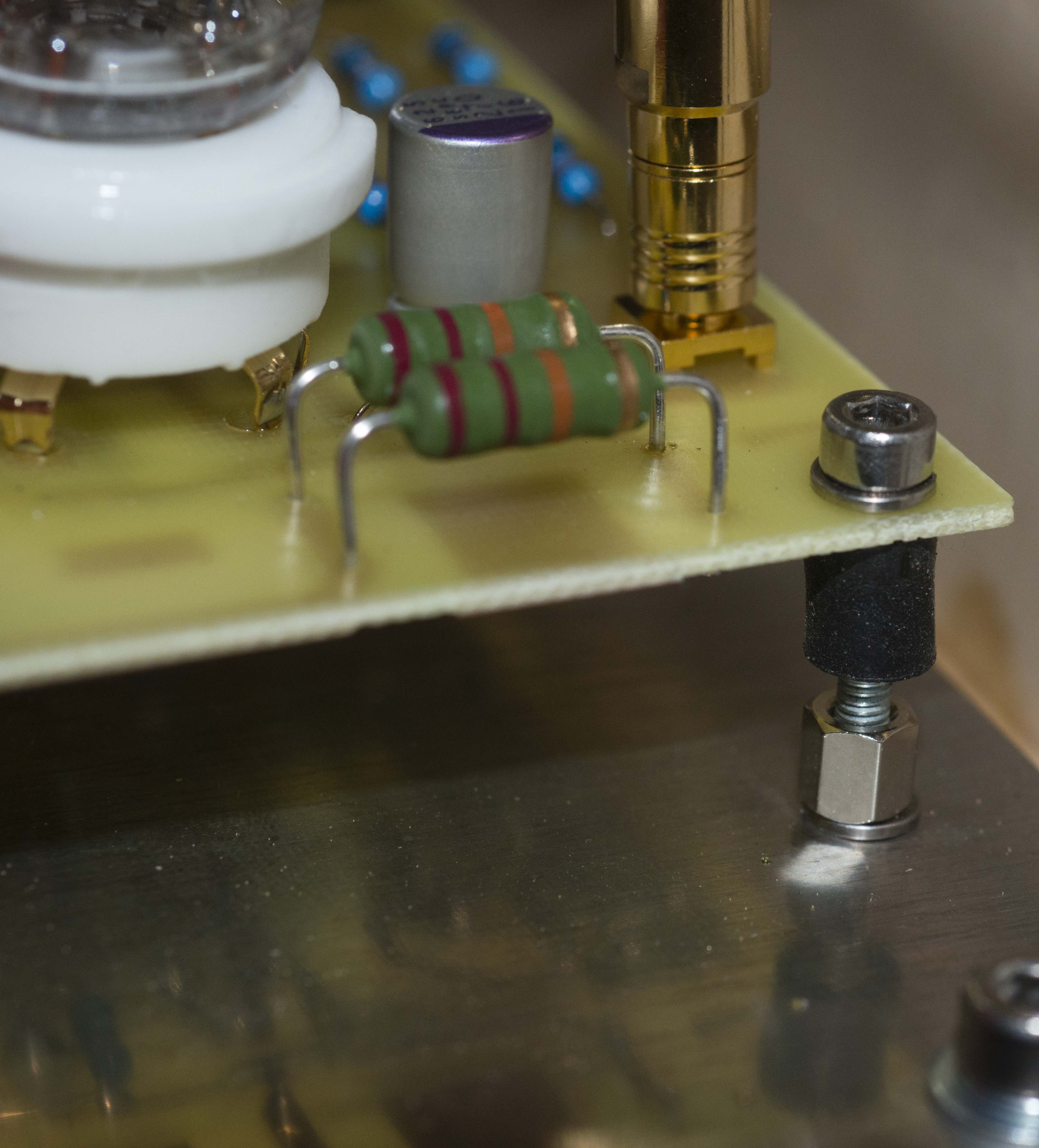 The front and back I designed with MPX and milled aluminum panels.

The entire structure was unproblematic in the wooden chassis and mechanically extremely robust. 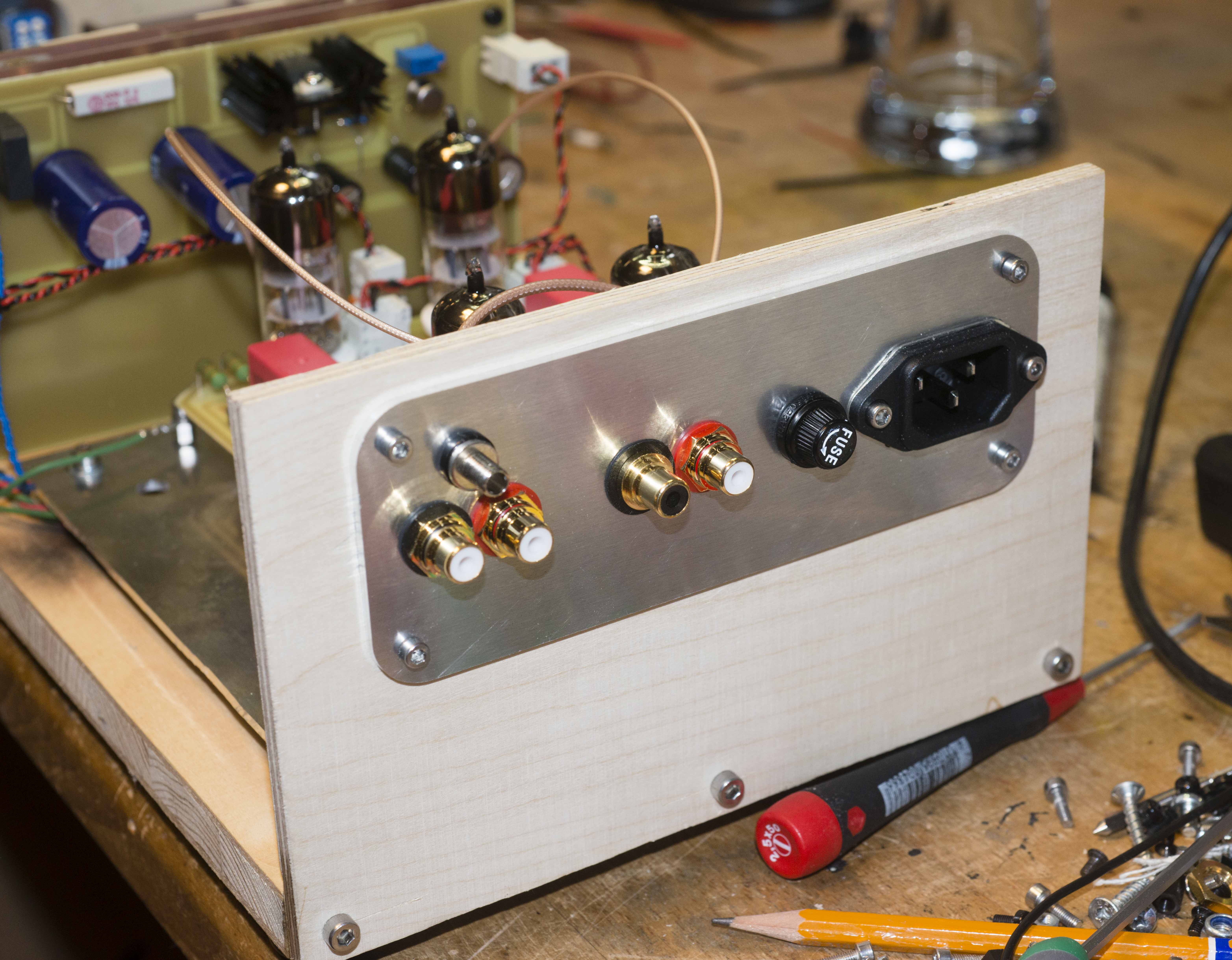 After a few hours of construction work, an unusually unproblematic commissioning took place.

At first, I do not hear anything . Just silence, no noise, no hum, nothing!

No, far from it! After lowering the tonearm came music! And how!

Crisp basses, very dynamic, but at the first impression musically and in detail.

One plate after the other migrated to the restored TD 126, and the Ortofon VM silver went up on the often maligned TP 16 to its top form.

Yes, that’s how I had imagined it – but not immediately expected. 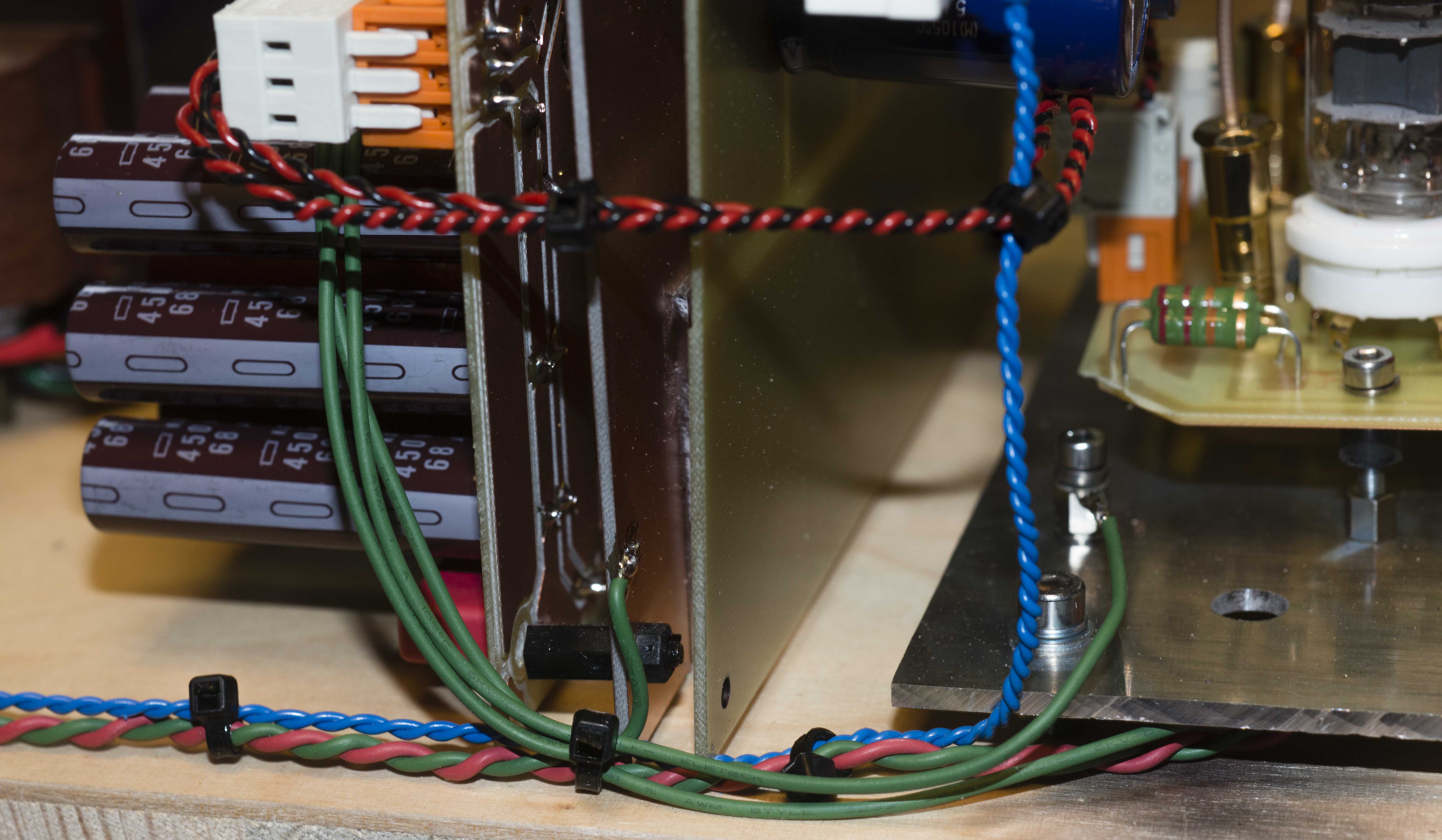 Quickly measured, balanced voltages (215 V) before the anode load resistors, and + – 0.8 V anode voltage across all tubes.
The purchase seemed to have paid off, no loss.

Let’s see how it develops in the coming days, but first I am very satisfied and have an RIAA, which acts signal-wise on CD level.
So no turning up / down the volume pot more …….

Re-building worth, especially since the tubes are still passable to procure.

We use cookies on our website to give you the most relevant experience by remembering your preferences and repeat visits. By clicking “Accept All”, you consent to the use of ALL the cookies. However, you may visit "Cookie Settings" to provide a controlled consent.
Cookie SettingsAccept All
Manage consent

This website uses cookies to improve your experience while you navigate through the website. Out of these, the cookies that are categorized as necessary are stored on your browser as they are essential for the working of basic functionalities of the website. We also use third-party cookies that help us analyze and understand how you use this website. These cookies will be stored in your browser only with your consent. You also have the option to opt-out of these cookies. But opting out of some of these cookies may affect your browsing experience.
Necessary immer aktiv
Necessary cookies are absolutely essential for the website to function properly. These cookies ensure basic functionalities and security features of the website, anonymously.
Functional
Functional cookies help to perform certain functionalities like sharing the content of the website on social media platforms, collect feedbacks, and other third-party features.
Performance
Performance cookies are used to understand and analyze the key performance indexes of the website which helps in delivering a better user experience for the visitors.
Analytics
Analytical cookies are used to understand how visitors interact with the website. These cookies help provide information on metrics the number of visitors, bounce rate, traffic source, etc.
Advertisement
Advertisement cookies are used to provide visitors with relevant ads and marketing campaigns. These cookies track visitors across websites and collect information to provide customized ads.
Others
Other uncategorized cookies are those that are being analyzed and have not been classified into a category as yet.
SPEICHERN & AKZEPTIEREN